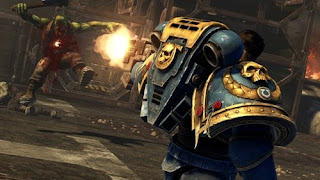 Sure, I'm nowhere near completing it, it only came out about 24 hours ago as of writing this.  But that was enough to put a couple of evenings in and let people know what it is like.

The Campaign
I'm enjoying it, but the cheese is thick on this one.  You start by jumping out a thunderhawk wearing a jump pack and armed with just a knife and bolt pistol.  Guess the Ultramarines ran out of power swords for their captains.  After completing the first part you end up discussing whether the whole jump pack decent thing was really codex approved.  Odd seeing as I'm not sure your lack of armament is either.  Oh and Space Marines have super hair.  Descending at a great speed you thud to the ground and not a hair moves on your head.  Yes you are that awesome that even you hair cannot be ruffled.

OK I realize the crappy weapons are part of the game progression where I unlock cooler things (Oh, shiny, now I have a Bolt Gun) but couldn't they have just had the lead character be a sergeant?  At least then the equipment would fit a bit better.  Otherwise, it has been fun so far.  Firing the heavy bolter was cool.  Realizing I could break it off its mount and walk around with it was cooler.  The guardsmen are well done, and the orks are spot on.  The new weapon (whats the bet it shows up in 6th edition), the vengeance grenade launcher (actually they are mines) is cool, as is the sergeant Telion favorite the Stalker Pattern Bolt Gun.

The Multiplayer
I did OK on day 1.  Day 2 and I've ended up in games where the total of all the levels on my side is less than the level of 1 person on the other side.  A bit of balancing would be nice.  There are only two game types for the multiplayer, Annihilation and Seize Ground.  Really, no CTF? no King of the Hill?  There are also only a fairly limited range of maps and some seem to show up more than others.  Hopefully they'll add more later.  The game play is fun and helped by quick respawns and short journey times.  You start as a tactical marine but shortly unlock devastator and then assault.  Each is well differentiated so you can decide which fits your game play.  Not only are you leveling up, you are working towards a metric assload of unlocks by completing Challenges.  Win 5 times as Marines, unlock X.  Get 50 kills with the bolt pistol, unlock Y.  Fart in surprise when a havoc drops in front of you and you manage to somehow kill him by shooting him in the face, unlock Z.

The other part of the mutliplayer I was eagerly looking forward to is the customization.  They make you wait until level 4 to get this, but it is nicely done.  They have a good selection of premade chapters, and a nicely detailed builder to make your own.  And yes, it is awesome that all the color choices are based on citadel paints.  The only downer is no ability to upload your own chapter badge.  I guess if they had though we'd have penis marines running around by now which would be stupid.  Maybe they'll add other badges later as DLC?  The customizer also lets you configure weapon load outs and armor appearance.  Lots of cool looking armor from Mk4 to Mk8 with lots of alternates in there too.  Pity most is locked until I can figure out how to fart on demand and get the bonus there.

Overall
I'm enjoying it and would definitely recommend it.  The marines feel like marines, and the combat is cinematic and cool.  Only their complete lack of ability in climbing any wall over about 3 feet tall brings you back to 'reality'.  I'll certainly be working my way through the campaign based on the promise it has shown so far.  The multiplayer I'm also enjoying, but that may well wear off if they don't add some more maps and a bit of balancing.  Only so many times some dude with a las cannon can snipe you from halfway across the map before it gets annoying.

Who else out there is playing it, and what do you think?

Marcus
Posted by Citizensmith at 8:27 PM