Should have asked for more

I've been depainting and repainting loads of the old 1st gen plastic space marines.  I had a mixed batch of 15 left over and decided I'd sell them.  They were all intact, but needed a depaint, and probably some conversion work as some of the weapons were no longer current in 5th gen.  I asked $40 for them.  They lasted about 3 hours apparently.  Guess my price was a bit low.  :)

I may ask the guys in the store who bought them if it was a regular.  If they are a decent painter I'd like to see what they do with them.

Now (rubs hands together) what to get with the store credit.  I've got requests from the kids, from my wife, and there is always plenty I want.
Posted by Citizensmith at 6:45 PM No comments:

So here's the deal (on the slight off chance that someone somewhere is even vaguely interested).  Used to do this ages ago.  In fact I was in line outside a GW to buy Rogue Trader at age 13.  Kept playing with the minis until I was around 22 but then lapsed somewhat on the gaming.  Two kids later, they are starting to get into some of the same things I remember having fun with.  I'm of course happy to help them along.  For their birthdays this year my kids both got some 40K minis.  Fletcher Space Marines, Morgan Orks.  I'd got a good start on the painting, but boy do we have a lot to do.  Add to that I picked up a couple of sets with some of my birthday money, and as mentioned my dad brought over my old stuff.  Well, here's the to do list which I'll update as I go along.

Marcus's Rabble (stuff I picked up because it was cheap and looked interesting to paint)
Primed and ready
6 Tau XV25s, and 20 Eldar Guardians
Done
Necron Destroyer

For me though, I'm going to slowly work on an IG army as its what I used to play at Epic Scale.  Not got much yet, and no plans to rush into it, got too much other stuff first.  My old minis have provided a penal legion squad, psyker battle squad, and a couple of 'counts as' special characters.  Then I've got a couple of sentinels, the vendetta, and about 20 guardsmen.  Just enough for a legal force, although a pretty small and unbalanced one.  For the guardsmen I've been experimenting more with washes.  I remember liking the old GW washes, but not the range of colors.  Then I discovered Payne's Gray.  It's a blue gray that is perfect for shadows.  So flat coat the guardsmen, bit of dry brush, and drown them in Payne's Gray wash.  Put a unit out on the table and they look really good. 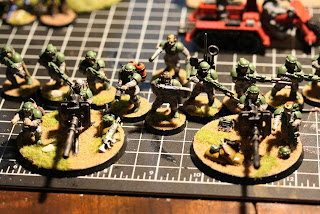 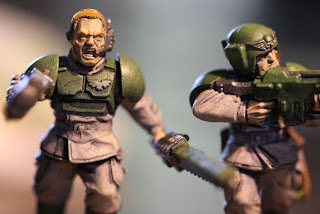 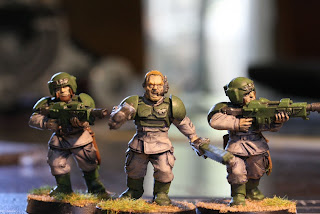 When my dad came over at the start of the month he was nice enough to bring along some of my old minis.  This included 79 (I think it was) space marines.  Couple that with what one of my kids already had and we have more than a company.  Thing is the were all painted as Dark Angels, and at a time when that meant red strip, yellow eyes, job done.  Some time in a cup of simple green has been helping get off the old paint.  Then I'll repaint in Ultramarine colors to merge in with Fletcher's army.  I'll get the points up quick, just be very lacking in armor. 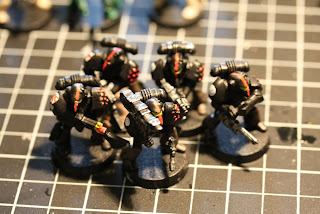 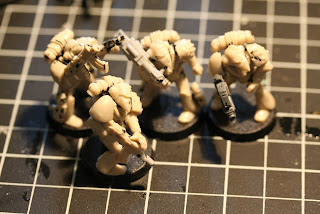 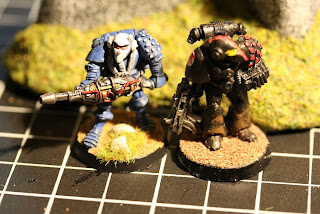 Posted by Citizensmith at 7:07 PM No comments:

Same deal as with the Vendetta, the final weathering effect wasn't nearly as good as before I sprayed on the top coat.  The dark earth powder did a great job on the legs of this sentinel though. 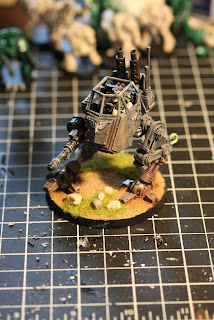 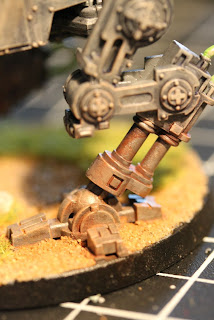 Posted by Citizensmith at 6:55 PM No comments:

Playing a bit of catch up here.  Took the photos and then didn't upload them.  I wanted to post an example of weathering powders.  I'm happy (mostly) with the finished work on the Vendetta.  Big model and you had to paint it in pieces so you needed patience with this one.  Having finished it, and happy with the Russian MiG look I was going for, I added the weathering.  Dirt along the base and leading edges, and rust/backwash on the tail cross bar behind the engines.  It looked great.  And then I sprayed on the sealer and the weathering mostly we bye bye.   So, here's the deal with this as others have commented.  Seal before you put on the weathering, then weather, then really lightly over seal.  Otherwise the sealer will blow away your wonderful looking weathering. 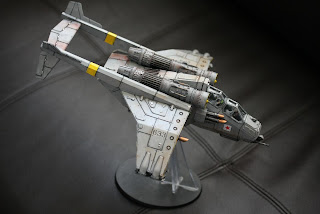 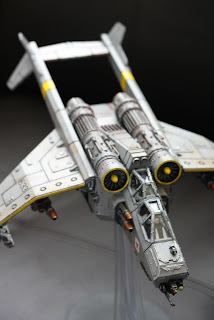 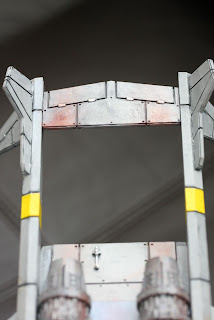 Posted by Citizensmith at 6:52 PM No comments:

I've plenty to paint at the moment, but I thought I'd post something else I painted recently. I picked up some Secret Weapon resin bases. These are the 40mm Ruined Temple bases. Really impressive, a nicely done product. I still need to attach some termies to them, but very happy so far. 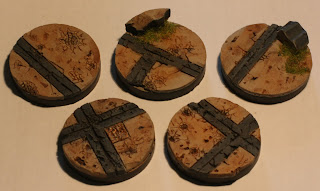 Posted by Citizensmith at 9:01 PM No comments:

The movie They Live

would have been very different if Roddy Piper's character had actually had some bubble gum.
Posted by Citizensmith at 4:32 PM No comments:

My dad was over for a couple of weeks and a fun time with family. He bought with him a few boxes of my old mini from back in the day. Paint job on some of these was interesting. You can kind of see me learning new techniques when you look through them. I knew Fletcher would like some more marines, so a few hours in PineSol stripped the paint of a bunch and I just got redone painting them. Pretty happy with the results. The first is a 1985 'marine with heavy laser'. Kind of had to get painted up as sternguard. 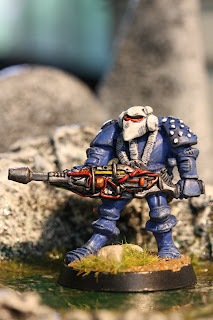 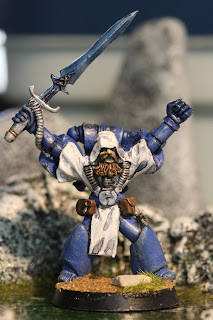 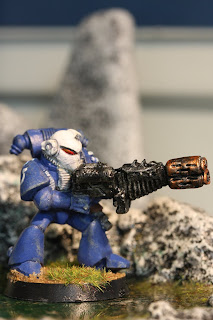 Posted by Citizensmith at 5:33 PM No comments:

Painting club (of one)

Went to the FLGS for what is apparently the normal Monday evening painting group. Figured I could learn something. Except nobody else was there. So I chatted to a few of the folks I know in there, and I couple I didn't know. One guy had some really well painted marines, definitely some skills on that guy. I was painting a few marines myself, one of which was 3 years older than him. Despite the lack of people it was a nice, relaxing evening. Definitely plan on making a habit of it.

Oh, and the FLGS in this case is Great Escape Games. Really nice store with good staff, and a really easy going atmosphere.
Posted by Citizensmith at 8:54 AM No comments:

I used to think playing table top war games, CCGs and painting minis was enough to make you a geek. Now I guess you need to blog about it too. Well, I'm sure I'll keep this going for ever. There is no way I'll get bored with it, rarely make any updates and then realise I haven't touched it in a year. Who knows someone may even read one of the posts. Doubt it though.
Posted by Citizensmith at 9:57 PM No comments: