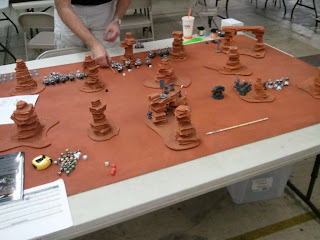 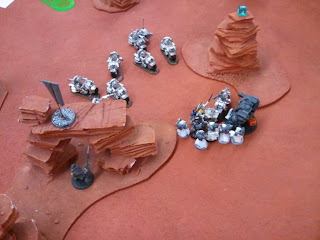 So in all, fun game.  I don't think I really screwed anything up but made one possibly poor choice, I should have held either the terminators or strike squad back and deep striked them on to the other objective.  Instead I'd held everyone together to try and bring a lot of fire power to the middle of the board.  Dave countered by bringing everyone in further down so he could pound the strike squad without too much return fire to start with.  I'd never played against bikes before.  Toughness 5, fast movement, and relentless twin linked bolters mean they can put out a lot of hurt.  Turn 4 was what really hurt me.  Failing 3 of 5 2+ saves and then watching as my assault failed badly was a big swing for just two sets of rolling right near each other.  Otherwise it would have been closer as I'd have had a few terminators left to bring the fight to the attack bikes and at least contest the objective.
Posted by Citizensmith at 11:12 PM No comments: