I've finally finished the first set of Warmachine minis we picked up at christmas.  This is the Khador and Menoth battle boxes, a few mercenary solos, and then some Cygnar stuff and a couple of units rescued from the consignment case at the FLGS. 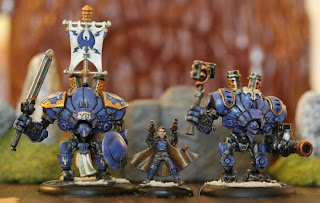 From Cygnar with have my "best ever consignment case purchase™"  These three were $20, unassembled and all crammed into one box.  Caine, a Stormclad and a Defender for a 13 point start.  Happy with how they came out, although I need to redo the eyes on the war caster.  I suck at eyes.

From Menoth we have the 11 point start of Fletcher's army, a basic Menoth battle box.  Again, fairly happy with how they came out.  Only issue is a like a dirty, battle worn kind of look.  On the white though its killed detail some.  I may go back and try and tidy these up a little.

From Khador we have the17 point start of Morgan's army, a basic Khador battle box with a unit of Doom Reavers.  These all came together well, I'm happy with how the came out.

And lastly, assorted mercenaries.  Greygore Boomhowler and Co, Taryn Di La Rovissi, Rutger Shaw and  Dannon Blyth and Bull.  The Greygore lot were the other consignment case find.  The rest were picked up just because they were cool minis.  They'll be useful to balance points out though when we start playing and learning the rules as there are 14 points worth here in 4 selections.

We've got a few more coming.  I've got Reinholdt and the other half of some Khador Mekanics sitting on the painting table (first half are done).  Then the kids are getting a couple of the cheapo minis for valentines day, and Fletcher is getting a bunch of Menoth stuff for his birthday.  I'll say one thing for Warmachine, seems like getting a good, playable army together is far quicker and cheaper than 40K.  Obviously its a smaller scale game, but with a lower entry cost building a nice custom army or two is no big deal.
Posted by Citizensmith at 10:56 AM