Imperial Guard vs Necron at 1250 points.

Had my first game in something like 18 years.  It was a lot of fun despite barely hanging in to the end of the 7th and loosing one objective to none.
I was playing guard, we were at 1250 points.

I played against Necron which was
HQ - Lord on demolisher body with war scythe and phylactery.
Elite - squad of 10 flayed ones.
Troops - 2 warrior squads (10 or 12 in a squad I think)
Fast - 3 wraiths, 5 destroyers
Heavy - 2 tomb spiders

We had two objectives, roughly in the middle of each half and were deploying along long edges.
He took first turn and set up down one end.  I set up my LRBT and manticore in the opposite corner with the foot troops around them.  I had the demolisher, chimera/plasma vets and vendetta/melta vets in the middle to hit one side.  He infiltrated the flayers towards my troops, I kept the sentinel in reserve. 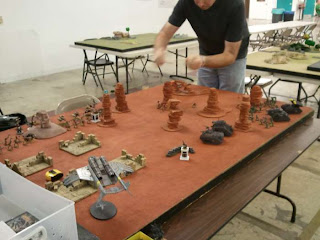 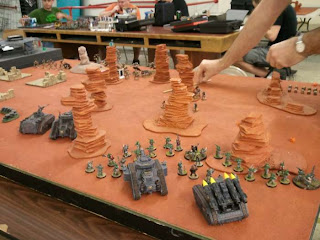 OK, not sure if everything is correct but the rough version of it is as follows.

Turn 1 - he immobilizes the vendetta despite its turbo boost and it lands behind cover so it now can't see much to shoot.
I drop a demolisher round, 2 template storm eagle,  battle cannon round and assorted multilaser and heavy bolter fire onto the middle of his troops/destroyers/lord.  I manage to down 1 warrior the gets back up and put one wound on the lord.  Yeah, bad rolls considering all the artillery was on target.  The guard open up on the flayed ones and do nothing.

Turn 2 - the wraiths roll up to find the vets that had got out the downed vendetta  and wipe them out.  Spectacular failure there.  The destroyers stun the chimera and shake the demolisher.  The flayed ones don't get very far.
The manticore and LRBT down a destroyer and a couple of warriors.  The plasma vets realize they can see the lord and open fire.  The lord drops.  The 30 guardsmen continue firing at the flayed ones and do nothing.  I think the quote was 'your dice are crapping on you and mine are giving me love'.  Even operation 'Deploy happy meal unicorn' failed to stop the flayed ones. 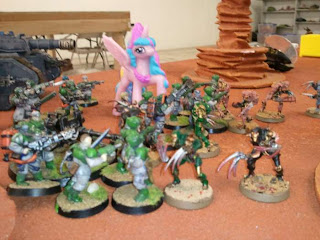 Turn 3 - The lord gets back up with one wound but decides to go help out the flayed ones.  The wraiths blow up the chimera but it drops one of them.  The destroyers fire at the plasma vets and kill a couple.  The flayed ones make it into combat.  A bunch of guard die.  It is the only flayed one to fail a save the entire game.
The LRBT and manticore do some decent damage in the midfield taking out a few warriors a destroyer, and the Lord.  Again.  The plasma vets tag the wraiths and take them out.  The demolisher knocks out a couple more warriors.  More guard die to flayed ones including most of the PCS and all but one heavy weapon team.  The CCS shoots at the flayed ones and kill one.  The only one to die all game.

Turn 4 - The lord gets up again, on two wounds this time, goes and finds the LRBT and blows it up.  The flayed ones arrive and kill all the CCS aside from the commander.  The demolisher is now weaponless and immobilized but doesn't die.
The Manticore still does good with its last storm eagle, another warrior and another destroyer.  The Commander dies leaving me with 4 troops left.  But yay, the sentinel finally puts in an appearance, shoots and does nothing.

Turn 5 - The flayed ones finally drop the commander and run off towards the chimera.  The destroyers target the disabled demolisher but do nothing.  The lord comes back for the plasma vets and does nothing and takes no damage back.  Everything else is out the way.
The manticore opens fire with the heavy bolter, doing nothing.  The sentinel manages to kill a warrior and the unit fails the only leadership test failed by Necron the entire game and run away from the objective.  Small miracles.  This time the lord kills all but one vet who manages to put a wound on him before breaking combat and running for the table edge.

Turn 6 - The flayed ones and lord surround the manticore and by some small miracle do nothing but knock the heavy bolter off.  The destroyers kill the disabled demolisher.  Nothing else is in any position to do anything.  Aside from the 3 warriors who run off the table.
The sentinel pops shots at the destroyers to no effect.  The manticore plows through the surrounding troops and tries to leg it.

Turn 7 - The lord and flayed ones chase the manticore and for the second turn it amazingly survives.
The sentinel pops shots at the other warriors to no effect.
Game over, he has one objective, I have none. 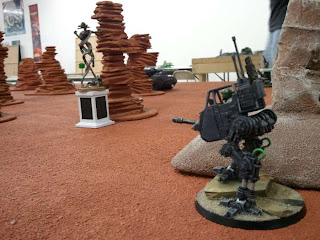 So that's it.  Biggest failure, the melta vets in the vendetta that achieved nothing.  Best, the manticore gave me 7 templates of hits and the plasma vets did great.  The sentinel did show up late, but cleared an objective without ever taking a hit. The lord ate 6 wounds worth of hits when he could have been out turn two, and the flayed ones seemed to have extra magic armor the way they made saving throws.  Because of that the flayed ones destroyed my back field, and the lord kept me busy in the middle letting his destroyers do more damage.

Most importantly though, it was a lot of fun and I learned the rules a lot better, all the better to teach my kids.  Next week I'll be back with 1500 in vanilla marines that are half my kids, and half my old army from back when I last played.
Posted by Citizensmith at 10:46 PM