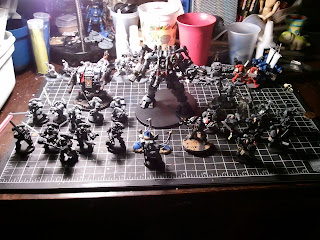 Had a fun evening at the FLGS with a 1000 point battle against IG.  I had my kids around and so with keeping an eye on them I completely forgot to take any photos.  Please imaging that my Grey Knights all have awesome paint jobs as I have even touched most of them yet.  :)  Apologies for the included photo, really crap but at least it shows what I used.

He took player 1, it was capture and control, pitched battle.  The objectives ended up in opposite corners, both behind cover.  He set up both russes in the middle, one troop squad (PCS and 2IS) either side with the CCS on his objective.  Sentinels were kept in reserve. I set up a strike and interceptor squad at either end, dreadnought near my objective, dreadknight in the middle as that gave it the only bit of cover big enough to protect it from the Russes.  I failed to steal the initiative.

Oh, and this was a rusty player (IG) vs. a very rusty player with a new army (GK) so plenty of mistakes were made.

IG Turn 1
Not much for the IG to see without moving.  Russ one moved forward and fired at a strike squad, killing one. Russ two went towards the opposite end and tagged an interceptor squad, killing three.  A few autocannons opened up killing another of the interceptors and denting paint on the dreadknight.  When you only have 22 guys, loosing 5 in turn one didn't feel good.

GK Turn 1
The lonely interceptor heads for the board edge, but too far to reach it so he'll be back.  The dreadknight starts to run forward but is too far away to do much of anything as he'd started with some big cover between him the the paid of Russes.  The strike squad near my objective move forward and open fire on a guard infantry squad.  Only one in range though and he doesn't do anything.  At the other end, the strike squad shunt forward and land right in front of the IG command squad.  They open fire, all guns blazing, and just kill to guys.  Pretty pathetic really. The strike squad on that side tries to move through difficult terrain.  1 for movement, 1 for running.  Yay.  The dreadnought though starts to earn its points.  It shuffles forwards and puts shots into the side armor of one of the Russes.  Boom, wrecked.  Turn 1 was nasty for both sides.

IG turn 2
The first sentinel shows up, lined up across from the dreadnought.  One guard squad moves around to support the command squad but everyone else stays stationary.  Lots of heavy weapons fire but all it does is kill one strike squad dude, shake the dreadnought (a glance from the russ) and scratch a bit more paint on the dreadknight.  The command squad open fire on the interceptors and kill 2.  The infantry behind them join in the fight and kill 2 more.

GK Turn 2
The dreadknight continues to run forward, still out of range, but safer with one russ down.  The paladin deep strikes in but mishaps.  He ends up in the far back corner, too far to be any use at all.
The strike squad in the open move forward far enough to put a lot of shots into an infantry squad and kill 4.  The dreadnought passes its psychic test so is back in the game.  It shoots at the other Russ, but now is hitting front armor.  It gets lucky and glances, the Russ won't be shooting next turn.  The other strike squad stuck on the hill continue to run forward.  1 for movement, 2 for running.  Damn.  The lone interceptor down one end gets it together, un slings his incinerator and hits shunt to drop in front of an infantry squad.  Five guardsmen go up in flames.  The lone interceptor at the other end shots at the command squad leaving just the commander standing who he then runs in and beats down with the back end of his psycannon.

IG turn 3
Another Sentinel arrives and parks next to the first.  I had skull probes around my objective to stop him dropping there.  The Russ moves for better positioning, but that is about it.  Lots of lascannon and autocannon fire.  The dreadknight eats plenty without taking a wound and the dreadnought is shaken again.  The lone interceptor that burnt some guardsmen gets drowned in a hail of fire.  The lone interceptor that beat down the command squad manages somehow to survive.

GK Turn 3
The lone interceptor runs towards the infantry squad that killed his team mates.  He drops one on the way in, and then another two in close combat.  The infantry squad fail to hurt him so he cuts them down as they try and run.  The dreadknight is finally in range for its heavy incinerator.  It lets fly, burning half a squad of infantry men.  The strike squad defending their objective have moved far enough out that they can engage the sentinels.  A stream of psycannon and stormbolter shots blow off the lascannon and immobilize it, effectively out the game.  The dreadnought backs up away from the fire of the Russ and turns its canons on the other sentinel, easily destroying it.  And finally, the guys stuck on the hill roll a 6 and make it clear.  Only just though and too far away to hit anything.

IG turn 4
The last sentinel arrives, at the other end this time to try and contest their objective.  The Russ shoots at the strike squad moving that way and kills one.  The other infantry squad near the IG objective opens fire on the last interceptor and kills him.  Autocannon fire also kills one of the strike squad at the other end.  More shooting thuds into the dreadknight which happily makes its save.

GK turn 4
The knights want both objective so one strike squad backs off to their home objective while the other moves then runs towards the IG objective.  The Malleus inquisitor hits the power button on his daemon hammer and moves towards the sentinel.  The dreadnaught pulls forwards and opens up on the front armor of the Russ, no effect.  The Dreadknight turns on the burninator, reduces a squad to one guy and then squashes him with his daemon hammer.

IG Turn 5
The Russ pops a shot at the defending strike squad before they disappear from view.  A direct hit, reducing them to one guy.  One of the lascannons can see the paladin who has been moving forward in a vague attempt to be relevant.  Dead Paladin from some lascannon instant death.  The rest of the table concentrate fire on the dreadknight which is now in the guard lines.  It makes all the saves it needs to.

GK Turn 5
The lone defending strike squad member hangs out back at the GK objective, probably reading Grey Knight books to keep himself calm.  The 3 survivors of the other strike squad make it to the enemy objective and exchange high fives.  The inquisitor creeps up behind the sentinel and taps it on the shoulder.  With a daemon hammer.  The sentinel misses its attack and then turns into a large explosion which fails to hurt anything.  The dreadknight burninates another squad just killing two.  He steps in for a bit of hammer time and finishes the job that way.  The dreadnaught again tags the Russ and again does nothing but annoy them.

IG turn 6
The Russ shoots at the Dreadnought, pinning hit but again just shakes it.  Everyone else opens up again on the dreadknight which again withers the shots.  By this stage though, there aren't many shots coming in.

GK Turn 6
Another psychic test for the dreadnought and it shakes of the shaken result.  It again guns for the Russ, this time scoring two glances.  Immobilized and shaken.  The dreadknight gets another burninate in but only adds two to the barbecue and is too far to assault anything.

Thoughts
Seth had some bad rolling, lots of misses but it is guard so you expect that.  I had some good rolling, particularly with the Dreadknight who didn't ever take damage.  The dreadknight excelled, the psy-dakkadread did great and in general the ability of the knights to move and fire to almost full effect really showed off.  Loosing the interceptor squads early felt bad, but better the shooting went there than into other things.  Makes me think minimum points interceptors as a sacrificial first wave may be a good idea.  Pity I didn't get to play with the paladin, I was looking forward to seeing what he could do if he reached close combat.

Screw ups wise, we forgot orders which could have helped kill my offensive interceptors earlier and maybe helped put some wounds on the dreadknight.  We also forgot to ID the heavy weapons team as the burninator is strength 6, and lastly I forgot hammerhand the times I made it into combat.  Thing is, not sure I even needed it.  Seems like against a mostly foot guard the knights have a fairly easy day.
Posted by Citizensmith at 10:19 PM