Things have been progressing OK on the painting front.  The backlog has been building though, and as I'm working on learning new techniques and trying new things I've been slowing down.  The Chaos Daemon is 'finished'.  I'm OK with it, the style I was going for only half worked.  I finished another Russ too.  Went simple on this one and actually prefer it to some of the stuff I did on the Chimeras.  I magnetized all the weapons too, although the turret can only swap between battle cannon and vanquisher cannon.  The demolisher turret was so much easier to magnetize.  Lastly, the 3 reaper minis I picked up.  I've been working on doing my skin tones better, so added some darker colors.  Repeated attempts to get things looking OK so its on a bit thick.  The guy (officer of the fleet for my IG) is coming along OK, the other two though, not sure about.  I'm far from happy with them yet. 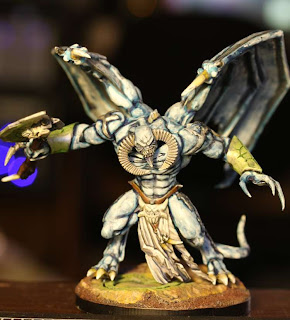 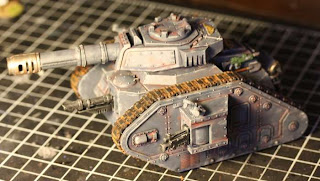 Posted by Citizensmith at 7:22 PM